Smoke Comes Out Your Arse 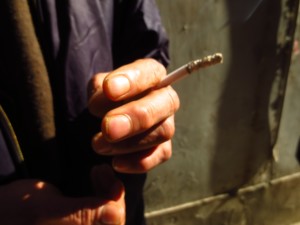 Smoke! Is it just me or has Central become unbearable after the smoking ban was implemented? I’ve become one of those middle-aged hags who sniffily wave her hand in front of her face while walking, or rather, negotiating the palls of smoke hanging over each dustbin between the ferry pier and my office. (“My office” being of course Honolulu Coffee and Cake Shop where I work as dogsie bodie.)

In Cantonese,’to smoke’ is 食煙,(sek yin – eat smoke). In the olden days we used to be asked 食唔食煙呀？(sek m sek yin ah? – Eat not eat smoke?) and if not eat smoke, be seated at least 5 cm from the nearest smoker… Happy times. 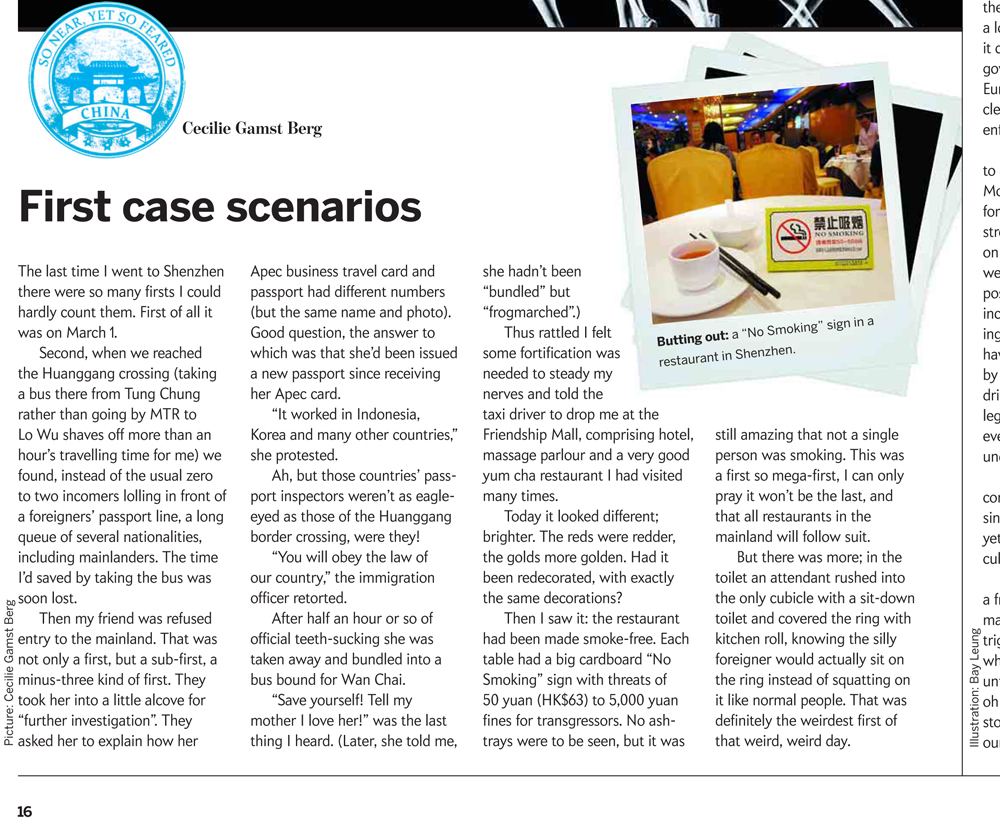 A terrible happening from ah-Mok’s past | Happy Jellyfish

A terrible happening from ah-Mok’s past

A terrible happening from ah-Mok’s past comes back to haunt him. See episode 22 first!

Public Security Uncle On The Road 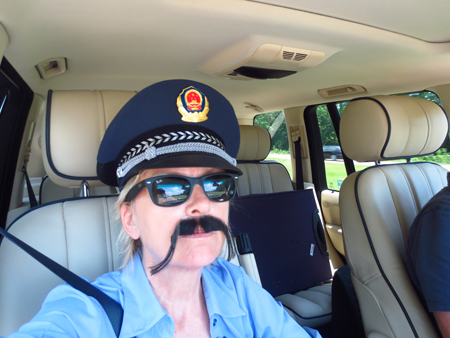 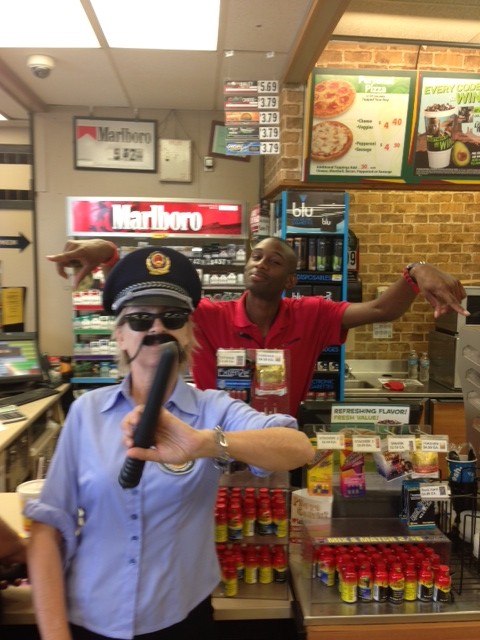 Yes, that Public Security Uncle, he does get around a bit. 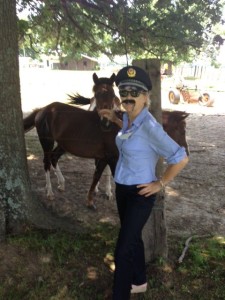 Unfortunately an unfathomable tragedy happened: He lost his badge in a shrubbery incident just outside Santa Fe. 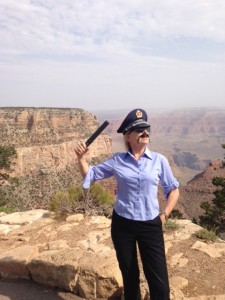 Good thing he had his trusty deputy Bronto with him, on holiday from his day job at YMCA: 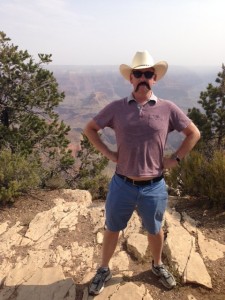 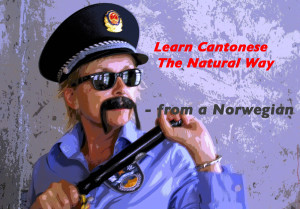 Finally I’ve got my new website with modern features such as Cantonese teaching videos downloadable to your electric iPaddage or phone!!!!
I’ve waited three years for this. Thank you Trystan Grace

Oh Cradle of Cantonese – Where Did You Go? | Happy Jellyfish

Oh Cradle of Cantonese – Where Did You Go? Guangzhou has been my favourite big city in China for years, certainly after the government finished the destruction of Beijiing in the name of the sacred olympics.

Two weeks ago I was there again, probably for the 100th time, strolling around the insanely beautiful neighbourhoods just north of the Pearl River, with their warrens of no-car streets, washing hanging out to dry, bougainvillea and unique “qi lou” (riding house) architecture. Two- floor houses in village style alleys right in the middle of a huge, mega-huge metropolis – where else can you find that? In China, I mean? Nowadays? Even two weeks ago everything was as it’s always been and Chinese New Year was finally over so all the people had returned, the myriad shops re-open for business in a big way.

I’ve sung the praises of Guangzhou before more than once in this forum, and was really looking forward to taking some important clients there this weekend.

I’m so naive! What only two weeks ago was beautiful Guangzhou at its finest is now: The biggest construction site on the planet. It started with the taxi stand right outside GZ East Station; it is no more. Now you have to walk 500 meters from the station to get a taxi because a large shopping mall is being built right outside the station. Yeah, when people get off the train they no longer will want to get a taxi, what they want to do is go shopping. With their large suitcases.
I should have known…
It got worse when I hit my favourite place on earth, the crazy wildness of tiny streets where only bicycles and hand-pulled trollies can go. Every house is now covered in tarpaulin and scaffolding to make it into this: This is obviously set in motion by the government; not that many house owners can have decided to turn their gaff into Alcatraz in one week. This can only mean one thing: Guangzhou is being spruced up for the ASIAN GAMES.

We hurried away from the city to find some respite in beautiful Yunfu two hours’ bus ride away. Since my clients had to get the 4.56 train back to Hong Kong today (we already had the tickets seeing my clients were flying out of Hong Kong early tomorrow morning) I thought leaving Yunfu at 12.30 would give us heaps of time. Get there 2.30, get the train at 4.56, oodles of time!
We hadn’t reckoned with the Asian Games. What only the day before had been a two hour bus trip now took three and a half hours because the road had turned into a nightmare with traffic jams starting about 40 kilometers outside Guangzhou proper and spreading all over the city – because they are making flower beds for the games.
Remember flower beds? Those which in the case of the Beijing Olympics caused people’s houses to be knocked down right up to the eve of the event to make way for flower beds so foreigners could look at “beautiful” flowers spelling out “Harmonious Beijing” and “China rules the world,” and whose incessant need for water meant that people in the surrounding provinces would have none?

It seems the Chinese authorities will spare their citizens no end of inconvenience for six or seven months, to accommodate a two week (or whatever) event. It took that particular bus 35 minutes to even reach the bus station from what would have been a two minute walk if we’d been allowed off the bus.

As it was, we missed the 4.56 train by about an hour and a half (even if we had got there on time, the walk from the new, now distant taxi stand to the train station would have killed our schedule completely) and I had to buy new tickets as they wouldn’t transfer the 4.56 ones to the 6.15 train.

It is therefore with a heavy heart I have to tell you this: Don’t go to Guangzhou for about seven months. It’s not worth it to be sitting in a bus, taxi or anything for two hours to travel 15 kilometers. And as for those beautiful old houses and winding old streets – I was so naive fearing they would one day be razed to the ground to make way for highways and shopping malls. Now they’re being preserved to look like some kind of super-security morgues. Tiles on the outside, tiles on the inside, covered in metal bars and with every scrap of history peeled off with industrial-strength history-removing acid.

And again it’s a bloody sports fair that’s the culprit. I’ve said it before: Sports kill. Goodbye, dear Guangzhou, you were so good while you lasted. 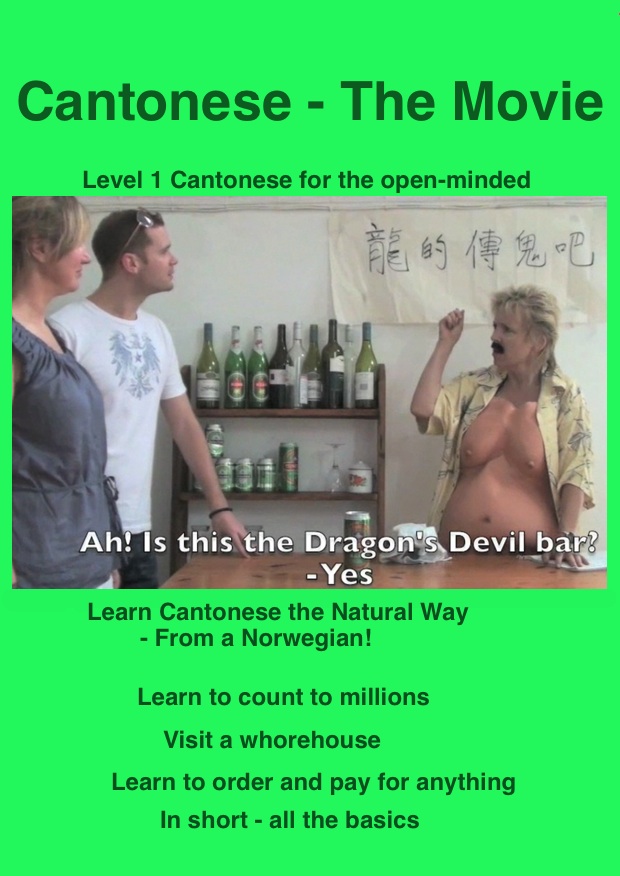 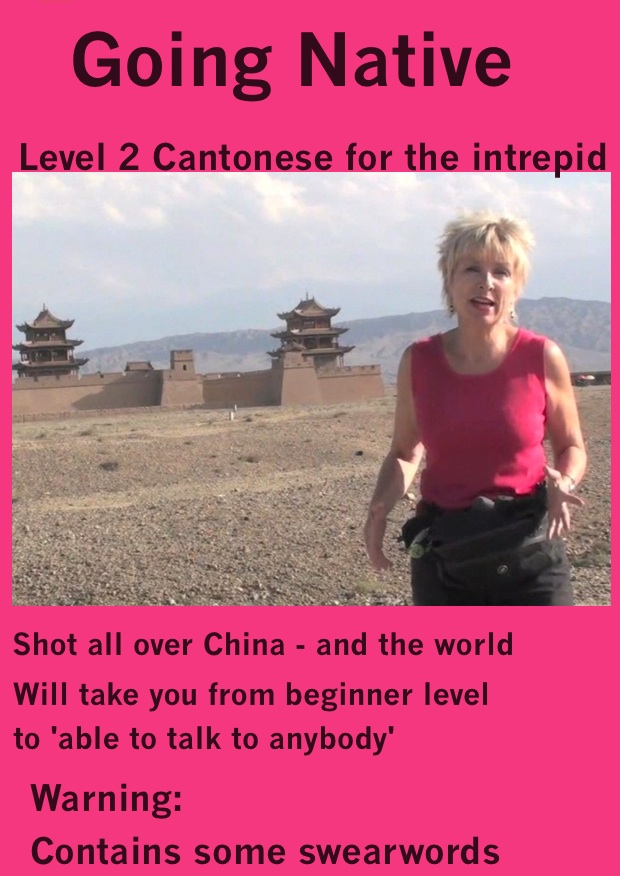 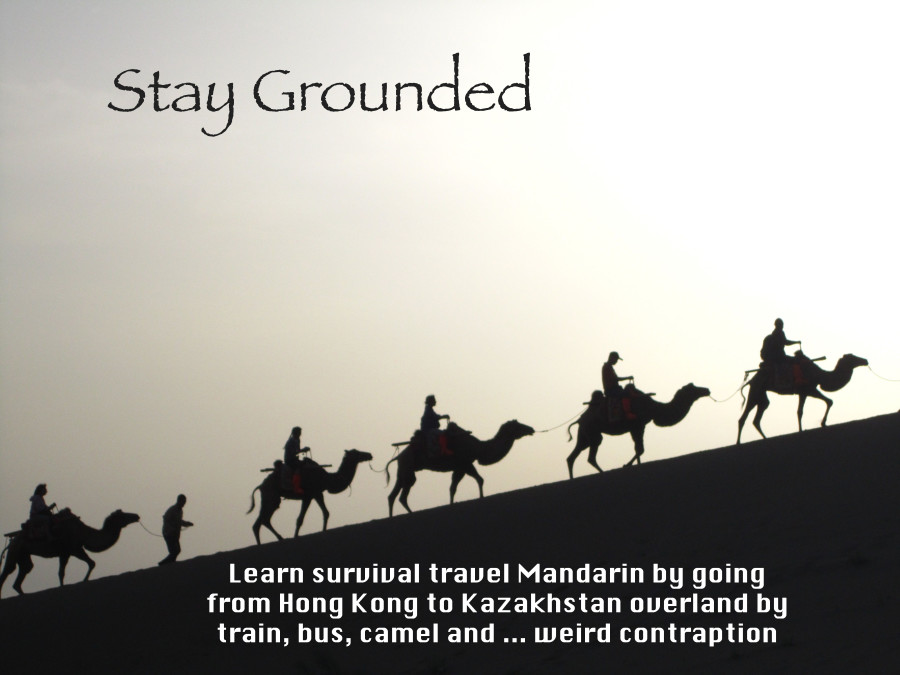